Over the years beer has flown into our beer glasses in an abundance. Beer has evolved but so has our beer glasses offering a wide range of styles and types with differing purposes. The material, size and even shape of our beer glasses is often used to affect taste, temperature, & usability amongst many other factors. We have put together this info-graphic (resembling an incredibly tall Strange glass) on the styles of beer glasses that are commonly used including Beer Steins, Nonic Pints, Conical Pints, Goblets, Mugs, Pilsner Glasses and more.

View our Range of Beer Glasses

These glasses are typically made of stoneware and porcelain but also pewter, wood and glass so are not exclusively stone. Beer steins can also be decorated like tankards to create ornate beer glasses that are often collected.

Beer steins can sometimes feature hinged lids which is believed by some to to prevent diseased flies from contaminating their beers during the Black Plague. 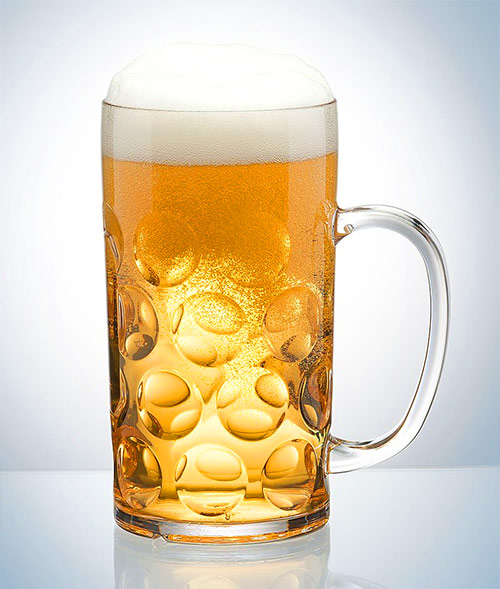 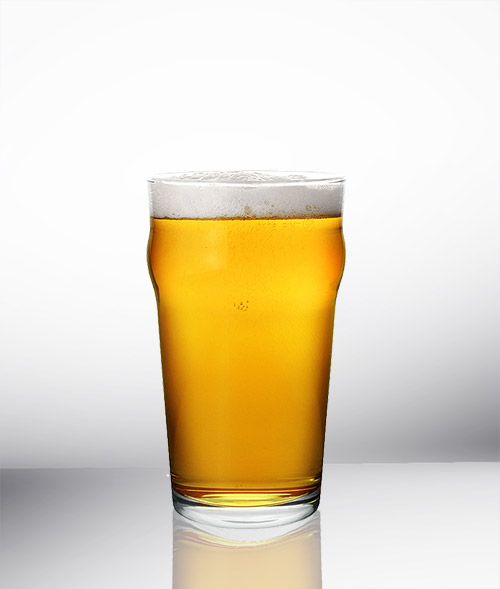 Traditional pint glass generally used to serve a British pint of beer however also commonly used for cider. The nonic glass is a variation of the simpler conical pint glass with a bulge near the top of the glass to improve grip and reduce the sticking and chipping (no-nicking) of glasses whilst stacked.

The "No Nick" glass was designed to have a 40% higher crushing strength during stacking when compared to conical glasses. This was originally invented by Hugo Pick, of Albert Pick & Co who patented the design in 1913. The patent was however later invalidated leading to the commercialisation of the nonic glass as we know today.

Similar to beer steins with a sturdy handle to make your beer easier to hold.

Traditionally used in England and America beer mugs are often thick and can come in a range of styles from dimpled sides to ridges down the sides. The thick walls help insulate your beer whilst handles can help reduce heat transfer from your hands to your beer.

The Oktoberfest Mug is a massive German beer mug featuring the dimpled sides. This traditionally fits a whopping 33 ounces of beer in one glass (when filled it's a struggle holding these comfortably with one hand). 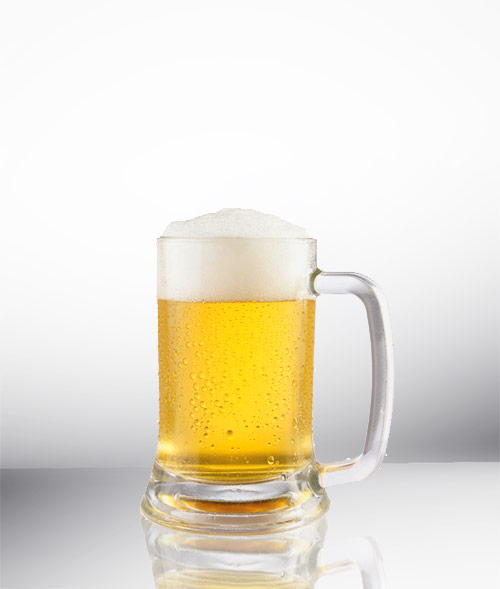 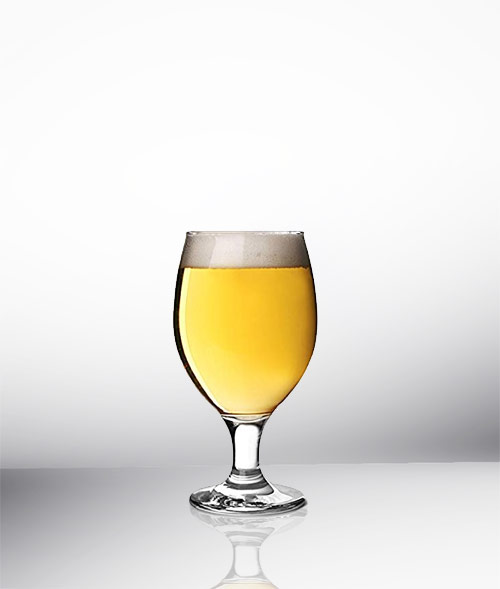 Goblets and chalices are typically Belgian vessels which can often be used to serve beers. Featuring large stemmed bowl-shaped glasses, these are often preferred when serving heavy Belgian ales and beers you may sip or slowly consume...

Similarly to wine glasses, stems can help in reducing the transfer of heat from your hand to the glass maintaining a cooler temperature for your beer whilst drinking. Stems can often be pinched to swirl beers whilst pouring, releasing aromas from your beer. Goblets tend to feature thickened glass when compared to chalices.

The Wheat Beer Glass or Weizen Glass is a tall glass with a narrow base like Pilsner glasses. Wheat beer is usually a top fermented beer featuring a large proportion of wheat against barley and commonly brewed in Germany and Belgium. The Weizenbeir glass is intended for the consumption of these Wheat beers which includes both dark and pale ales. The flared design helps with grip allowing an easy grip around the lower half of the glass. 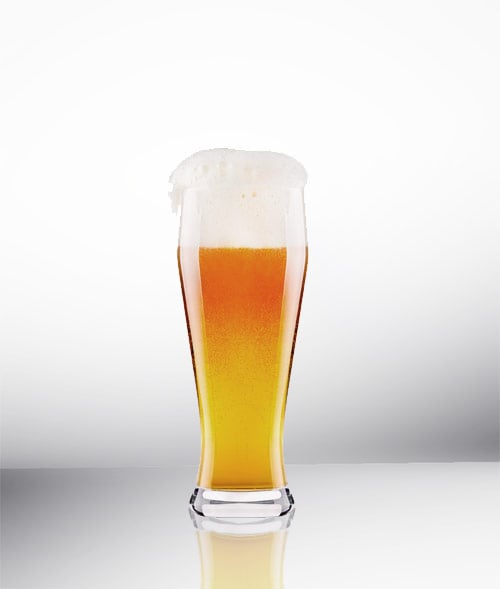 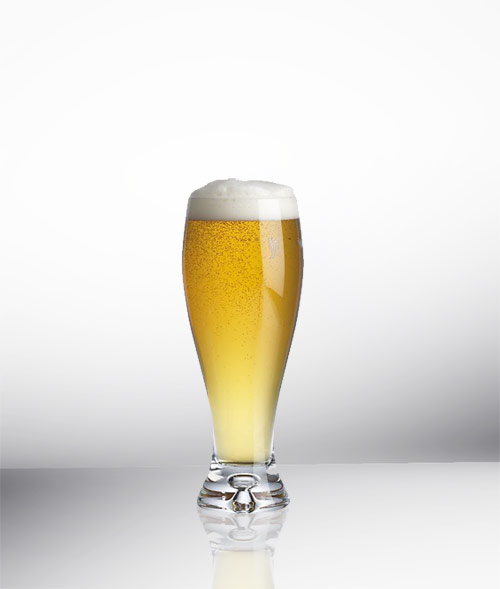 The pilsner glass is a tall narrow glass again used to serve beer. With a skinny shape that tends to flare out to a larger rim these allow for a nice head and retain the flavour of your beer. Although often smaller than a pint these glasses can come in varying sizes so you may not be getting sold short. Pilsner glasses are generally used when serving lighter beers like lagers and especially Pilsners. Pilsner originates from the Czech city of Pilsner and is a light blonde lager with a strong hop flavour.

Snifter glasses of just a snifter is a stemware glass not traditionally used for beers however beer, like with many of these glasses, has found its way in. These short-stemmed glasses have a wide bottom and narrow top and are typically used for brandy or whiskies. The idea is for the narrow top to trap aromas within the glass whilst the rounded bottom makes the glass fit nicely into the hand. This glass is often used with stronger beers with a high percentage alcohol such as stouts, porters, barley wine and more. 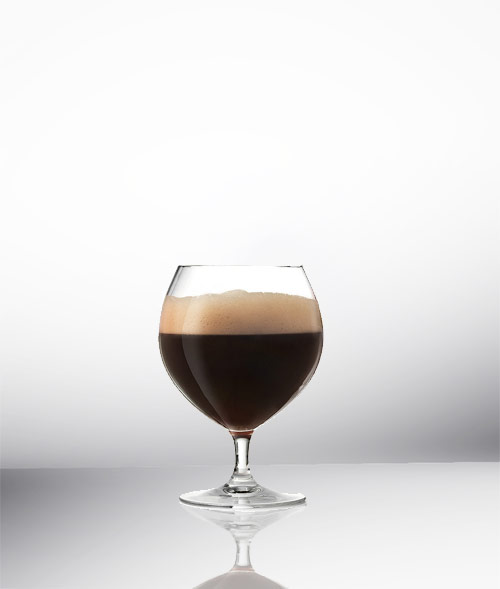 Similar in shape to the Snifter glasses with a short stem and bowl shape. The top however flares out resembling a tulip and giving them their name the tuilip glass. This glass is also recommended for stronger beers including ales, double IPAs, barley wines and more.

The strange glass or stangen glass is quite basic, shaped like a traditional straight tumbler contrary to its name. The name comes from the German for "strange" meaning rod, which resembles the straight shape of the glass. Often smaller than traditional beer glasses or pint glasses although does come in varying sizes. The strange glass is often used for the serving of delicate beers to intensify aromas. 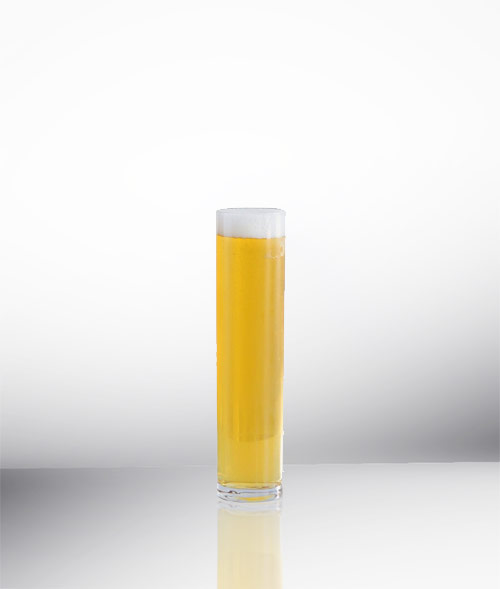 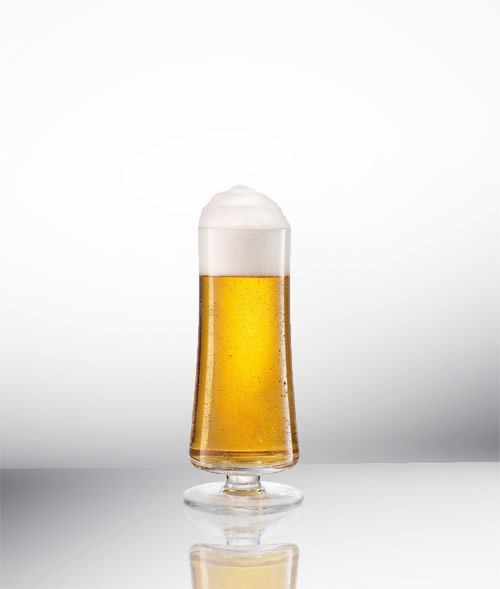 Another stemmed beer glass however with straight edges differing from the bowl shaped tulip glasses. The pokal glass is a European Pilsner glass however featuring a stem and base. This is often a popular choice for Lagers or Pilsners.

Conical pint glasses also known as a Shaker glass in America or Sleevers are an extremely common beer glass shaped like an upside-down cone. You may have used many of these in your time in pubs across the UK as a standard beer glass used for serving pints. The Nonic glass was based on this design in attempt to improve on certain aspects of the design to stop chipping and grip. 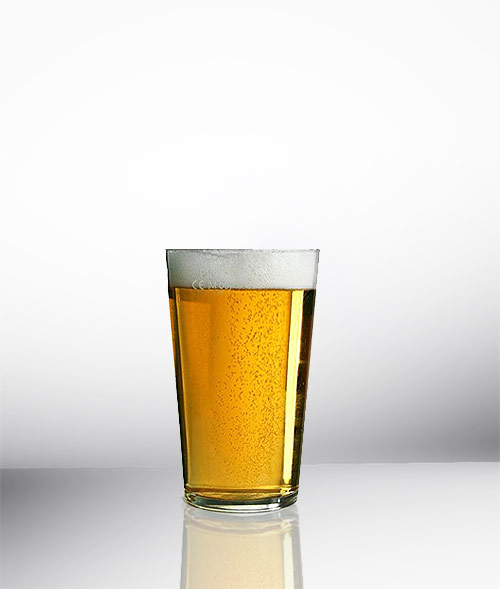 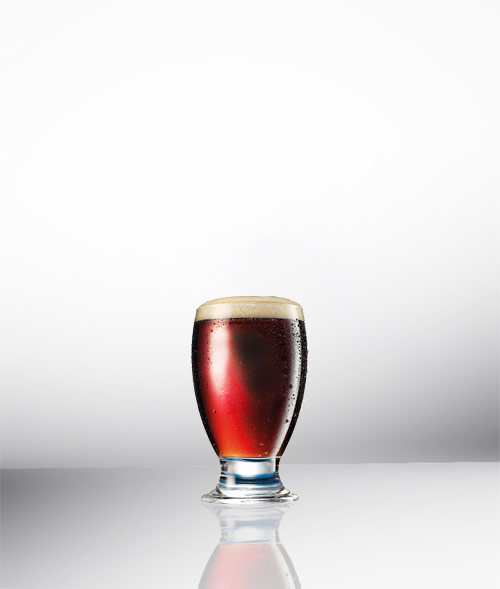 In the United Kingdom Schooners are typically not used for beer but is the name for a large sherry glass. These are smaller glasses commonly 425ml or 285ml with curved glass edges and shorter stems. Schooner glasses are also known as a pot or middy in some parts of Australia and here is where Schooners are more commonly used for the serving of beer. This is due to their smaller sizes allowing for the beer to be consumed before getting warmed up (they could just make things simpler and just drink quicker).

The Willi Becher glass is a common glass in Germany with a similar shape to conical pint glasses however the top half curves inwards for a smaller opening. These glasses come in a range of sizes to suit your drinking needs. 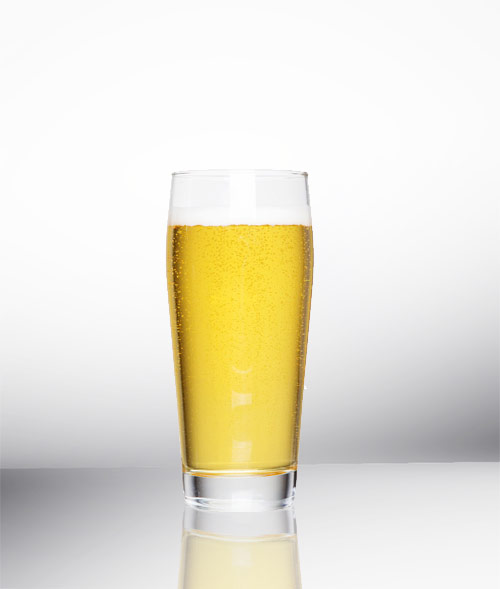 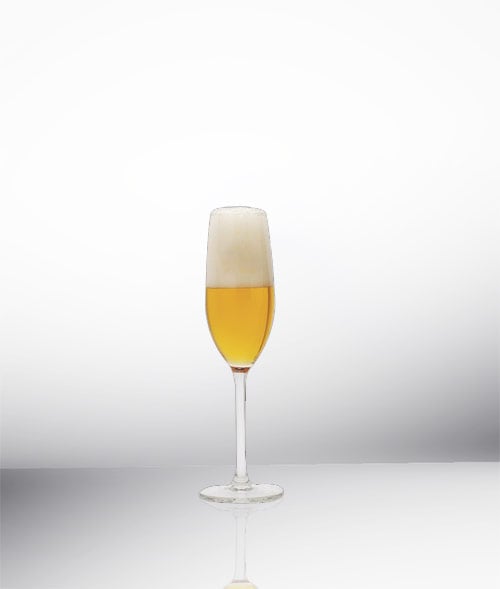 Although often the go to glassware for champagne and sparkling drinks this is another glass that beer has found its way into. Beer flutes are typically narrow and tall with a stem however the stem can often be shorter than standard champagne flutes. Although smaller than some of our other glasses on offer here beer flute glasses help to show off the carbonation process of beers giving of an intense aroma offering a pleasant drinking experience. You may just need to get up to the bar more often.

This is a slight adaption of the tulip glass which features a stem and rounded shape. Thistle glasses however are modified to resemble Scotland's national flower the thistle. Scotch ales are often therefore served from Thistle glasses which produce large foamy heads whilst capturing and enhancing volatiles. 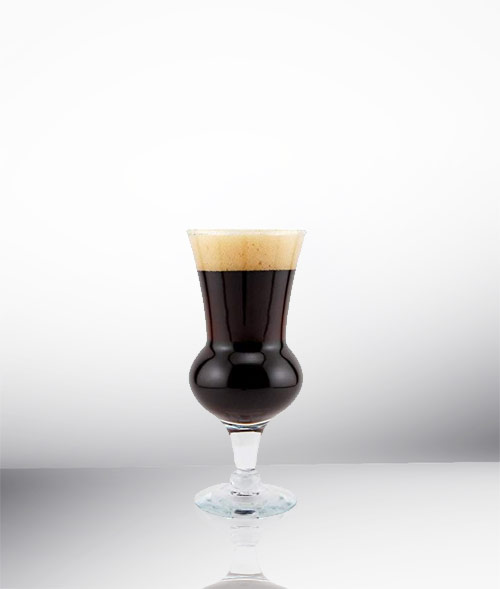 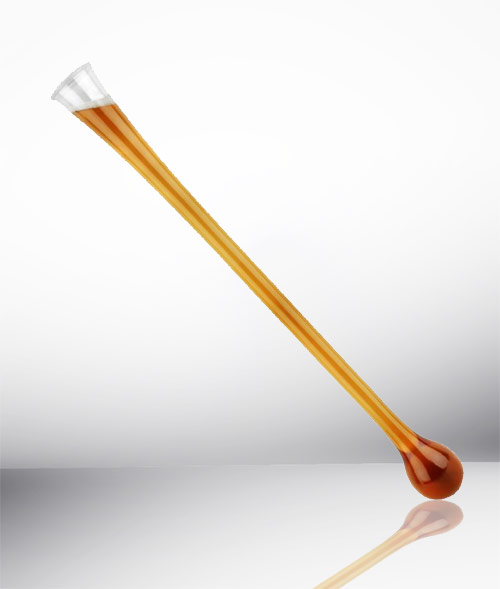 An extremely tall beer glass which holds 2 and a half pints of beer. Traditionally a yard long (approximately 90cm) featuring a bowl at the bottom and a widening shaft. They can come in various sizes with half yards also quite common but less impessive. A yard of ale normally sits in a stand as it cannot be set down on a table leisurely for your next sip, it is often required you drink the whole yard in one! It is thought that the glass originated in 17th century England referred to as the long glass or Cambridge yard glass. This glass as stated is often a challenge or pub game used for special toasts or if you fancy showing off (You can beat the world record quite easily it's only 5 seconds...)

Believe it or not these have a bit of history to them and are not just novelty glasses that have come to fruition in recent years. In a nutshell the Boot beer glass is a beer glass shaped like a boot. It's believed that a Prussian general promised to his troops that upon victory they could drink beer from his boot. Upon victory a glass-maker produced these Beer Boots for the troops to triumphantly enjoy beers from the Prussian general’s glass beer boots rather than his actual boot (their beers therefore tasted nicer and didn't leak wasting their beers). These are also used in challenges similarly to the yard of ale where at a festival or party downing a whole boot can be a testing feat.

We have a wide selection of beer glasses with variations of many of the above styles available. If you are looking for a beer glass we have what you need. Browse our beer glasses category of our website within our commercial glassware. You could also get creative and serve your beer in glassware from our creative drinkware category where our beer boot resides as well as an extensive collection of unique and interesting glassware that's sure to drop some jaws (so they can pour beer down there).